"Building Bridges" with Books: Immigration Stories to Share with Children

"Building Bridges" with Books: Immigration Stories to Share with Children

My mind has been on the power of immigration stories lately, in part because of current political debates, but especially because of the moving exhibit, Building Bridges: Portraits of Immigrants and Refugees, in Lowell’s Berkeley Library. The beautiful photographs of immigrants alongside their personal stories provide a human dimension to the political debates and expand our understanding of how varied immigration experiences can be and how central these stories are to our culture.

Because immigration figures so largely in American experience—in our personal stories as well as our national story—it’s not surprising that it comes up in children’s literature, too. The last several years have seen an uptick in such titles. In the same way that there is no “one” immigrant experience, there is no “one” type of immigration narrative. Still, certain themes come up repeatedly and contribute to the genre’s overall appeal: dealing with difference, coping with change, being apart from families, and adjusting to new cultural expectations.

Our libraries strive to provide age-appropriate titles that tell these stories from a variety of perspectives, including those of immigrants, their family members, and those who are native born. The power of the immigration experience is even embedded in books written for our youngest students. Recently, Lowell Librarian Christine McDaniels read Chee-Kee: A Panda in Bearland by Sujean Rim to Kindergarten and 1st grade students. Upon hearing the story of a panda who moves with his family to a new country, Bearland, students connected with the challenges of sometimes feeling different and isolated, and they appreciated the need to reach out with kindness, not condemnation, to each other.

Below is a sample of some of our books for students preschool–8th grade that deal with immigration. We invite you to share these titles with your children and encourage them to borrow them from the library. As always, if there’s a title that you’d like to share with us, please do so! 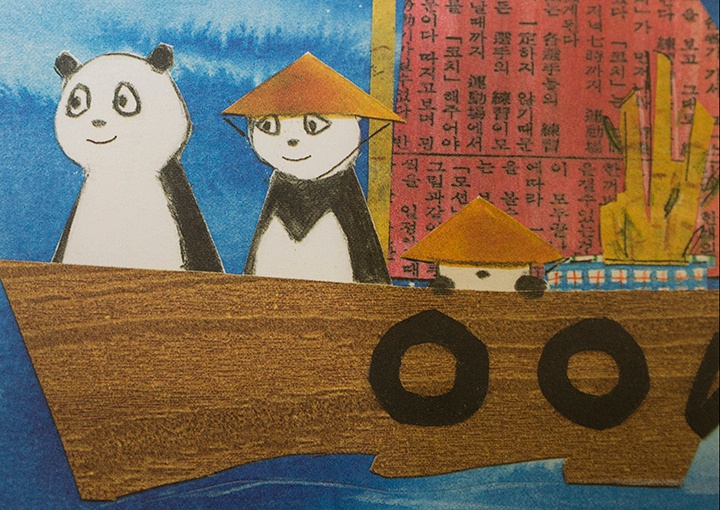 Chee-Kee : A Panda in Bearland by Sujean Rim—Chee-Kee, a young panda, moves with his parents to a new land of opportunity. Just when he's resigned to never fit in, Chee-Kee finds a way to use his own experience and ingenuity to save the day and show that he's one of a kind in all the best ways. (Preschool–3rd grade)

Grandfather’s Journey by Allen Say—A Japanese American man recounts his grandfather's journey to America, which he later also undertakes, and the feelings of being torn by a love for two different countries. (Preschool–3rd grade)

I’m New Here by Anne Sibley O’Brien—Three children from other countries (Somalia, Guatemala, and Korea) struggle to adjust to their new home and school in the United States. (K–2nd grade)

Inside Out and Back Again by Thanha Lai—Through a series of poems, a young girl chronicles the life-changing year of 1975, when she, her mother, and her brothers leave Vietnam and resettle in Alabama. (4th grade and up)

One Green Apple by Eve Bunting—While on a school field trip to an orchard to make cider, a young Muslim immigrant named Farah gains self-confidence when the green apple she picks perfectly complements the other students' red apples. (1st–4th grade)

Pancho Rabbit and the Coyote: A Migrant's Tale by Duncan Tonatiuh—When Papa Rabbit does not return home as expected from many seasons of working in the great carrot and lettuce fields of El Norte, his son Pancho sets out on a dangerous trek to find him, guided by a coyote. Includes author's note. (Preschool–2nd grade)

Their Great gift: Courage, Sacrifice, and Hope in a New Land by John Coy—This book explores the experience of immigrants who came to America in the twenty-first century, celebrating the diversity of the country and hope for the future. (1st grade and up)

Two White Rabbits by Jairo Buitrago—The little girl in this story is traveling with her father, but doesn't know where they are going. She counts the animals by the road, the clouds in the sky, the stars. Sometimes she sees soldiers. Sometimes they are forced to stop because her father has to earn more money before they can continue their journey. (K–3rd grade)

The Land of Forgotten Girls Erin Entrada Kelly—Abandoned by their father and living in poverty with their heartless stepmother in Louisiana, two sisters from the Philippines, twelve-year-old Sol and six-year-old Ming, learn the true meaning of family. (4th grade and up)

Mango, Abuela, and Me by Meg Media and Angela Dominguez—An endearing tale from an award-winning duo that speaks loud and clear about learning new things and the love that bonds family members. (Preschool–2nd grade) 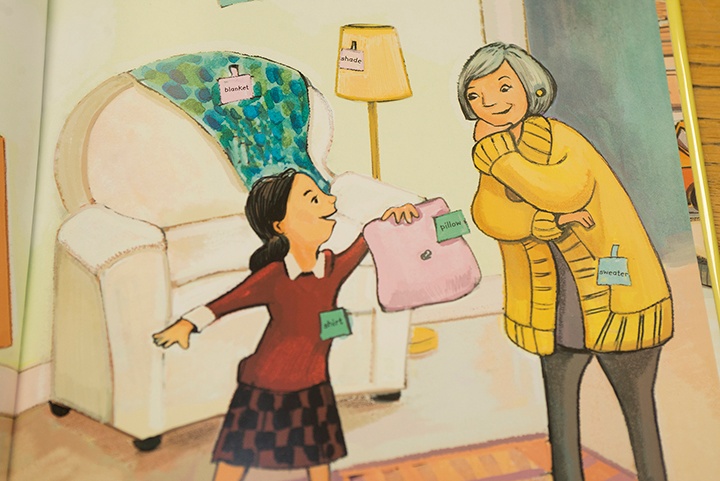 (from Mango, Abuela, and Me by Meg Media and Angela Dominguez)

My Diary from Here to There by Amada Irma Perez and Maya Christina Gonzalez—A young girl describes her feelings when her father decides to leave their home in Mexico to look for work in the United States. (2nd–5th grade)

A Piece of Home by Jeri Hanel Watts and Hyewon Yum—When Hee Jun's family moves from Korea to West Virginia, he struggles to adjust to his new home where none of his classmates look like him and he can't understand anything the teacher says—even when she speaks s-l-o-w-l-y and loudly to him. (K–2nd grade)

The Seeds of Friendship by Michael Foreman—Adam, an immigrant boy in a big city, is lonely until he see snow for the first time and starts to play with the neighborhood children, but when he starts school he gets some seeds and begins to plant them with help from his new friends. (Preschool–2nd grade)

American Born Chinese by Gene Luen Yang—This story about growing up different is more than just the story of a Chinese-American childhood; it's a fable for every kid born into a body and a life they wished they could escape. (6th grade and up)

Amina’s Voice by Hena Khan (coming to Lowell in April!)—Amina’s Voice brings to life the joys and challenges of a young Pakistani American and highlights the many ways in which one girl’s voice can help bring a diverse community together to love and support each other. (4th grade and up)

Anya’s Ghost by Vera Brosgol—Anya, embarrassed by her Russian immigrant family, has given up on fitting in at school. When she falls down a well and meets a ghost, her problems only get more complex. (7th grade and up)

The Arrival by Shaun Tan—This gorgeous graphic novel illustrates the story of a father leaving his family and trying to find a place in a completely foreign—and mystically alien—land. But other stories are represented here, too, and this breathtaking work winds up being a universal immigrant story told in a completely unique way. (6th grade and up)

Brothers in Hope by Mary Williams—Based on heartbreaking yet inspirational true events in the lives of the Lost Boys of Sudan, Brothers in Hope is a story of remarkable and enduring courage, and an amazing testament to the unyielding power of the human spirit. (4th grade and up)

The Distance Between Us by Reyna Grande—The young reader’s version of Reyna Grande’s eye-opening memoir about life before and after illegally immigrating from Mexico to the United States. (6th grade and up)

Enrique’s Journey: The True Story of a Boy Determined to Reunite with His Mother by Sonia Nazario—Seventeen-year-old Enrique leaves Honduras for the U.S. on a long and dangerous trek. Desperate for the mother who left years before, he endures violence, hunger, thirst, and deportations before reuniting with her. Their emotional scars and difficult lives promote readers’ consideration of the losses and injustices that many immigrants face. (7th grade and up)

The FIre Horse Girl by Kay Honeyman—Jade Moon is a Fire Horse, the worst sign in the Chinese zodiac for girls, said to make them stubborn, willful, and far too imaginative. But while her family despairs of marrying her off, she has a passionate heart and powerful dreams and wants only to find a way to make them come true. (8th grade and up)

Home of the Brave by Katherine Applegate—Kek, a young Sudanese refugee, saw his father and brother killed, and he left his mother behind when he joined his aunt's family in Minnesota. Kek’s individual story gets behind the news images of streaming refugees far away. (5th grade and up)

I Lived on Butterfly Hill Marjorie Agosin—A dictator’s rise to power results in many “disappearances” in 6thgrader Celeste’s beautiful Valparaíso, Chile. Her multigenerational, multi-ethnic family is affected as her parents go into hiding while Celeste is exiled to Maine, where she copes with the cold, loneliness, and a new language as she waits to return. (5th grade and up)

Katerina’s Wish by by Jeannie Mobley—When Trina and her family move to Colorado in the early 1900s, her only wish is to return home to their farm in Bohemia. But her father wishes for a farm in America, so he gets a job working in the dangerous coal mines to save money for his dream. Through hard work and ingenuity, Trina finds that wishes change, and she comes up with her own way to make them come true. (4th grade and up)

Outcasts United by Warren St. John—This YA-adapted version of a bestselling book of the same name tackles a slightly different genre of the modern immigrant story—refugees. Set in Clarkston, Georgia, this true story follows the Fugees, a youth soccer team with kids from war-torn areas of the Middle East, Africa, and Eastern Europe, and their indefatigable female coach. (7th grade and up)

Save Me a Seat by Sarah Weeks and Gita Varadarajan—Ravi has just moved to the United States from India and has always been at the top of his class. Joe has lived in the same town forever and has learning problems. Joe and Ravi don't think they have anything in common—but soon enough they have a common enemy (the biggest bully in their class) and a common mission: to take control of their lives over the course of a single crazy week. (4th grade and up)

Shooting Kabul by N.H. Senzai—Eleven-year-old Fadi is tasked with his sister’s care as the family escapes Afghanistan for San Francisco. However, Mariam is lost amid the chaos, and the family’s grief is palpable. Subsequent middle school adjustments are made difficult by 9/11, until Fadi’s participation in the school photography club results in a surprising conclusion. (5th grade and up)

This Land Is Our Land by Linda Barrett Osborne—A readable and elucidating historical overview of American immigration. Fantastic background information with helpful timelines. (5th grade and up)